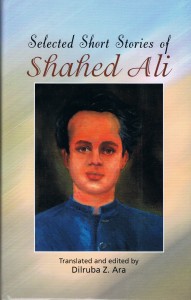 This unique and diverse collection of short stories by eminent Bengali author Shahed Ali (1922—2001) gives the reader a look into daily life in Bangladesh and its people. It exposes one to the beliefs and customs of the Bengali culture. It explores society from the upper crust to the poor and unfortunate, sharing a wonderful insight into the makings of each and every individual we meet through these stories. Ali’s ability to perceive, capture and pass on the subtleties of each and every character, their emotional actions, reactions and reasoning, is well ahead of its time. Although many of these stories were written years ago, their message is still relevant and applicable.

Shahed Ali started on his literary activities even before the Separation in 1947. His first story Asru (Tears) was published in 1940 in the renowned newspaperSawgat. He was then a pupil of grade eight.

Apart from a random number of stories, poems and essays published in different newspapers, and his one novel: Ridai Nadi: A heart like a river, he has to his credit six collections of short stories: Gibraeler Dana (Gabriel’s Wings), Eki Samatale (On the Same Plane), Atit Rater Kahini (Tale of a lost night), Amar Kahini (Ageless story), Shah Nazar : (ABridegroom’s Vision) and Natun Zamindar ( New landlord).

Shahed Ali also wrote Tawhid (Faith) and Bangla Sahitye Chattagramer Abadan (The Literary Contribution of Chittagong), Russian impact in Palestine, Samradjjahbad and Russia (Imperialism and Russia), Religion and Colonialism, Duty of the young Muslim Youngsters, Call of Freedom and the Cause of Disaster.

Unpublished Work:a collection of poems, written at the age of fifteen.

A number of his works have been translated into foreign languages. Some have been filmed and some dramatized for telecast

On his sick bed he dictated the translation of the Ancient life of the Roman, which is going to be published by Bangla Academy shortly.

In 2000, he was acclaimed nationally for his literary achievements and contribution to the language movement at Dhaka Press club.